The AGM of the Irish Texts Society is postponed and will be rescheduled for later in the year.

The Twenty-Second ITS Seminar is postponed to November 2021. The subject will be Gabháltais Shéarluis Mhóir, edited by Douglas Hyde, Irish Texts Society Main Series vol. 19 (1919).
More information on the Seminar page.

For latest information about this event, see the Events page.

A new website was launched at the annual UCC/ITS seminar on Saturday, 9 November, 2013. The aim of Irish Sagas Online (iso.ucc.ie) is to make available reliable versions of the original texts of medieval Irish sagas with parallel translations into Modern Irish and English. This website is the brainchild of Tom O'Donovan of University College Cork and has been launched with the participation and co-operation of the staff of the CELT project and the Celtic Digital Initiative. A central feature of this website is the provision of links to extant electronic resources which will allow interested parties better understand the context and content of Irish sagas.

Here are PDF files of the Newsletters published by the Society:

Visit to Áras an Uachtaráin

The President of Ireland, Michael D. Higgins, received the Council of the Irish Texts Society in Áras an Uachtaráin on Friday 15 February 2013. President Higgins made a short formal address in which he commended the important work the Society does on behalf of the Irish people. The President of the ITS, Professor Máire Herbert, thanked President Higgins for his kind words and for his public acknowledgement of the work of the Society. 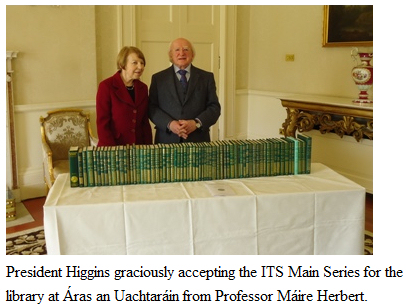 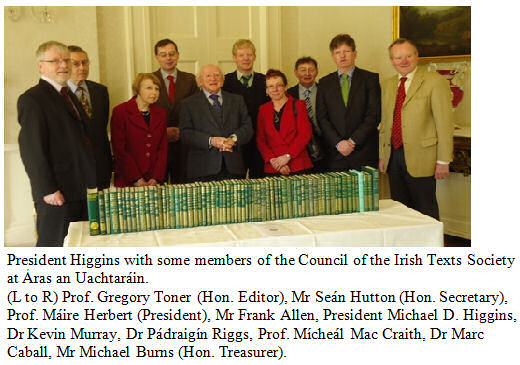